My Alamy experience - part the fifth

Nearing the end of my fourth year with Alamy and it's time for another round up.  I last published details of my experience with Alamy on 26 August 2016 so what's happened in the sixteen months since I last reported sales?

Firstly, a lot more sales.  And with a lot more sales has come increased revenue.  Through distributor sales I've sold in even more countries worldwide.  My Alamy ranking has considerably improved, with the result that I'm getting a lot more views and zooms.  I'm still without a QC failure since I started with Alamy.  And I've had another magazine front cover, my second.  So, the statistics:

Although most of the image sales have been for plant portraits or garden scenes I have sold a few other subjects.  The shot of Newton Ferrers I showed in the last Alamy experience update sold again in 2017, along with a couple of hoverfly shots and a shot of the False Widow spider.  I also sold a shot of the Admiral McBride pub on Plymouth Barbican.  I think the caption sold that - the pub stands on the site of the original Mayflower steps and very few photographers add that.  Here's the shot: 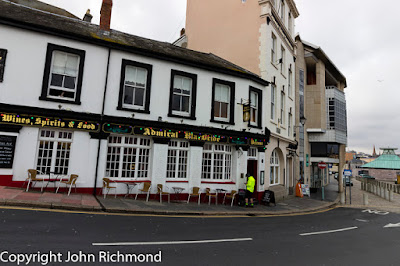 Devon Life is a glossy monthly UK magazine and they used an Autumn colour image of mine from The Garden House for the front cover of their November 2017 issue.  With the path leading in through the Japanese maples in the Acer glade it was obviously what the Art Editor / Designer wanted to fit the cover page text around.  Very satisfying - and quite lucrative.  I could do with a few more of those! 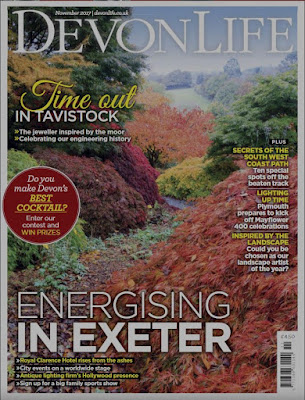 I mentioned in the last update the importance of a good ranking on Alamy to bring your images to the fore in searches.  With the extra sales and increased zooms has come a quite significant increase in rank.  Even so, I was surprised (and delighted) to see 5 of my images on the first search page (100 images) for garden wildlife after a recent rerank.  Given that 1316 pages of results - 131,583 images - come up in a search that's quite impressive.  I could give lots of similar examples of good search positions for my images.  That sort of increased visibility generates sales and, because it extends to all my images, encourages me to take and submit more photos that aren't plants, gardens or insects.  There's no shortage of opportunity in South West England.

2017 was an excellent year for me on Alamy.  It doesn't generate vast amounts of money but my operating costs are low, I'm doing something I thoroughly enjoy, and I'm able to afford my hobby now I'm fully retired.  2018 should be very interesting.
Posted by Trainer John at 7:19 AM

My plant, insect and other photos available for licence through Alamy

Trainer John
I'm a retired IT Trainer, living and working in the South West of England. My interests are many and various - gardening, photography, natural history, dogs, technology, science fiction and music. Years ago I trained as an ecologist - the hard science, statistical type, not the fluffy tree hugging type - and then worked as a teacher and part time writer. The last twenty years of my working life was spent as an IT Trainer. Post retirement I'm building a secondary career as a professional plant and garden photographer, enjoying sales worldwide. All of which means that my scientific BS detector is set to stun, I don't make a comment without checking my facts first - and that I can be ever so slightly preachy. No matter. Enjoy. And Maria? Maria is my lovely wife who tolerates my enthusiasms for writing about gardening and photography with great patience and understanding.